The culture, language and individual identity of the indigenous ‘Briton’ has long since been lost to invading races and the passage of time. It should not be surprising therefore, that the forces that gave rise to that, provided us with Monarchs whose hearts and souls were still steeped in their own native lands. For instance, Richard i (The Lionheart), of his ten-year reign, spent only one in England and never learned to speak English!

Understandably then, some were intent on being buried in the land of their birth rather than their adopted country. At least one – James ii – had little choice other than to live and die in France after being dethroned and exiled by Parliament in 1688. But I have stopped short of visiting their tombs due to their being desecrated and their remains scattered during the religious and civil wars of the 17th/18th centuries.

With the exception of George i, who died in Germany and is buried in a vault at his family’s castle in Herrenhausen near Hanover (not open to the public), nothing is left of the remaining English Monarchs buried in France save a thigh bone of William The Conqueror in his tomb at Caen.

Nevertheless, they constitute a vital part of the story and are accordingly included. They are:

Above: St Stephen’s Abbey, Caen and a view of the Nave. 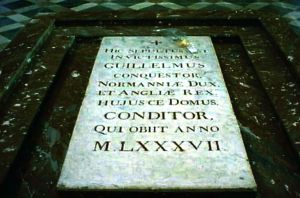 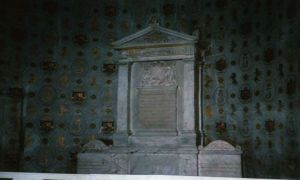 Below left: the tombs of Fontevrault Abbey of (at the back) King Henry ii, 1154-1189, with Queen Eleanor of Aquitaine on his right and, foreground, King Richard i (Coeur de Lion) 1189-1199 with Queen Berengaria on his right. 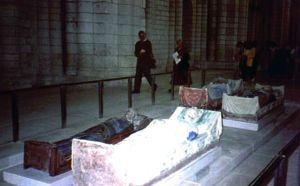 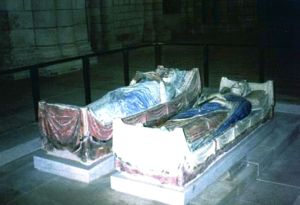 Above right: a closer view of King Henry’s and Queen Eleanor’s tombs.

This entry was posted in House of Stuart, Kings & Queens of England and tagged English Monarchs, Fontevrault Abbey, History, Royal, William The Conqueror. Bookmark the permalink.