Recent excavations have revealed the foundations of Hyde Abbey, Winchester, and information at my disposal regarding the burial of King Alfred seems relevant here. A summary is given below:

Alfred’s first recorded burial site in 901 was in the Old Minster from where he was reburied in the New Minster on its completion, eventually being translated to the great Hyde Abbey about a mile away. Only a few years after the Dissolution of Hyde in 1539, ‘Leyland’ the King’s antiquarian, records that ‘little tablets of lead’ bearing the names of Alfred and Edward were found in the tombs. The phraseology suggests that the tombs were opened, but there is no mention of the fate of the coffins or remains.

In 1788, further clearance of the site revealed the outline of the east end of the church where the site of the High Altar was established and where “a great stone coffin was found cased in lead both within and without and containing some bones and remains of garments. The lead in its decayed state was sold for two guineas – the bones thrown about and the stone coffin broken into pieces. There were two other coffins and no more found in this part …”

In 1866 John Mellor arrived in Winchester with the stated aim of finding royal remains which he claimed to have done with such speed that: “this self-styled antiquarian … breaking into some chalk graves … came across fragments of skeletons, one of which he immediately fixed upon as being that of King Alfred himself … by evidence of a leaded plate with the letter ‘A’ stamped on it”.

The plate was found to be of modern manufacture, which together with other inconsistencies about the excavations left Mellor’s findings worthless, and the remains he unearthed being reburied in St Bartholomew’s Churchyard.

Recent excavations found three tomb sites in the centre of the Apse where the High Altar stood – see plan here and the aerial photograph below. 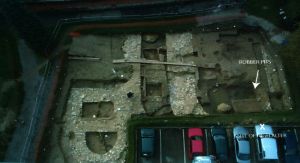